PANAMA CITY — Although the mission of Head Start is to get children started early on a lifetime of learning, the director of the local centers said the program actually is “a whole-family kind of thing.”

The national Head Start program celebrated its 50th anniversary this week. Since 1965, the program has served more than 31 million children from impoverished families throughout the country, officials said.

“It’s a program that focuses on the total child and family,” said Early Education and Care executive director Pamela Fleege.

She said Head Start gets parents involved, volunteering with classes and participating on a policy council that oversees the centers, something Fleege called “empowering” for many parents. It’s not unusual to see parents who serve on the 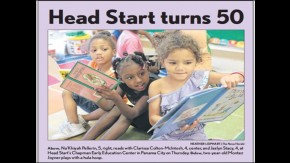 board running for student government at Gulf Coast State College or Florida State University Panama City and other leadership roles. Many earn degrees and hold down long-term jobs for the first time.

“It’s a whole-family kind of thing and it just lifts the family up,” Fleege said.

The program has been offered locally since 1983. It started as a six-week summer program to prepare children from impoverished families for kindergarten, Fleege said.

“They realized very early on that you don’t raise a child in a vacuum. They need to be healthy; they need to have social skills. Didaktika . They need all aspects,” Fleege said.

The program expanded into a full-year educational program for preschoolers, infants and toddlers.

The infant and toddler classes are less structured than the program for older children. The “baby room” is full of low surfaces for early walkers to pull up and hold onto and the teachers spend most of their time on the floor interacting with the children and working on fine motor skills.anded into a full-year educational program for preschoolers, infants and toddlers.

The preschoolers eat breakfast and lunch at school. Their meals are served “family style,” Fleege said, so they learn about portion control through serving themselves and have the opportunity to socialize with other children, developing language skills. Teachers often sit with their classes and engage with students during meals. After eating, students brush their teeth.

Fleege described the teaching style as “play-based,” which encourages the children to learn through songs, games and other fun activities.

“We’re fond of saying that, when the children head home, if you ask them what they did they’re going to say they played,” Fleege said. “In some ways I guess it’s kind of sneaky, but it keeps their attention. You have to gear your approach to the age of the child.”

The kids had a great time this year!
Gotta start thinking about it now!

Donate to show your support for our cause. It's Fast & Easy!